I have a Creality Ender 3 FDM 3D Printer. It's a workhorse. I've modded it, upgraded it, tweaked it, you name it. New Bed, Extruder, Motors, Springs, tons and tons. I also bought a laser for it. 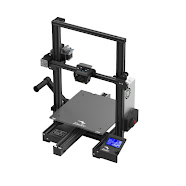 The Creality company offers a Laser Engraving Kit, which I of course picked up. It was $37CAD on sale with Free Shipping. Took about 3-4 weeks to get here during the end of Summer '21. 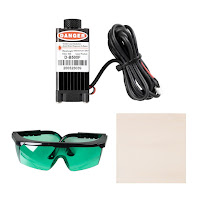 It's a 500mW 24V Laser Diode. It's roughly around the 445nm wavelength. This means we can engrave most woods, especially soft wood. I of course experimented with a bunch of different materials, who wouldn't? The laser sticks to the printer via magnets. It just sits on the front of the fan cage for the printer's hot-end. You could mount the laser module to its own gantry and replace as required, but the magnets handle my workload just fine.

Since I have a newer Ender 3, not the V2, I had to perform a little firmware modification. My Ender 3 came with the Creality board 4.2.2 also known as 4.2.x. This thing has a 'bug' that has been open. These Laser Modules are Laser Diodes with some PWM guts. This kit included a Y adapter to allow me to split the power/signal from the parts cooling fan. This fan operates on 24V PWM and so does the Laser. The bug is that the PWM frequency is so low that the Laser cannot get enough power. The fix is to change the timer for the header since it's already in use. The GitHub issue is here.

So what can this thing do? Well it started out rough. I used the software that Creality has and it's rough. I dug around for others and found some web-based tools and such. Nothing with great results. Pic related. 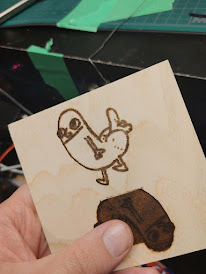 The bottom image was first. The laser wasn't shutting off for 'white' parts of the image. This was just a PNG/JPG of Dickbutt. The top part was done after when I figured out that the laser needs to be 1% to 'shut-off'' or else there is a delay in firing the laser. The image isn't very detailed and the lines are rough. The reason for this Creality's software can only fire the laser on/off. It doesn't have the ability to PWM the power.

LightBurn to the rescue?

A friend of mine owns a business that does CNC/Laser work. He suggested LightBurn. This software is used for Laser Cutting on bigger machines, and smaller now! LightBurn offers a Marlin/GCode version that allows me to either copy gcode files to SD or connect my printer directly to the USB port on my Laptop.

LightBurn properly controls the laser using PWM in the ranges that I select. I ran several power, speed and interval tests and found my butterzone. Overall I'm pleased with the results. I'm going to be offering custom made C64 stuff on my Tindie store and can't wait to see what else I can do with it.

As the weather gets colder, having accurate temperature and humidity readings in your home becomes increasingly important for comfort and sa...